If you haven’t heard already, it was announced over the weekend that President Donald Trump is coming to Fargo on June 27th. His decision to come and stump for Congressman Kevin Cramer, in his attempt to unseat Senator Heidi Heitkamp, is no doubt a welcome trip. After all, it wasn’t that long ago that Cramer had words with White House staffers over what some view as too friendly a relationship with Senator Heitkamp.

Congressman Cramer hasn’t been alone in his concerns. Politico wrote last month about the GOP’s dissatisfaction with “Trump’s Heitkamp flirtation“. In it they documented the fact that Trump met with Heitkamp in December of 2016, while considering her for a cabinet position— a meeting in which he is reported to have asked her to switch parties. They also pointed out that the embattled Senator was invited to ride Air Force One enroute to Trump’s visit to North Dakota in September of last year. It was this same visit that Trump referred to Heitkamp as a “good woman”— a comment some people speculated would be helpful to the Democratic Senator in her re-election bid. Then there was the bill signing for the Economic Growth, Regulatory Relief and Consumer Protect Act last month— which rolls back Dodd-Frank banking regulations. Heitkamp was a co-sponsor of the bill and the only Democrat in the room at its signing.

In a state where Trump won by nearly 36 points in the 2016 Presidential Election, Heitkamp is smart enough of a politician to realize she has to play ball with the President once in a while. Heck, she’s even running a campaign ad to tout the times she’s voted with Trump, while claiming not to be a “rubber stamp for anybody”.

Yet, the day after last week’s primary, President Trump Tweeted a hearty congratulations to Congressman Kevin Cramer for his “huge win” and once again gave him an endorsement— all while throwing a jab at Senator Heitkamp. 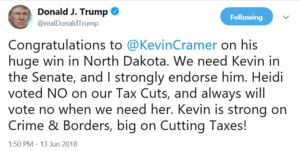 Just two days after this Tweet, it was announced that the President was coming to Fargo. This really shouldn’t be a surprise though. After all, it was Trump who encouraged Cramer to get into the U.S. Senate race in the first place.

November’s general election is set to be an important one for Republicans. With a narrow 51-49 lead in the Senate, it’s no secret that Heitkamp’s seat is coveted. In fact, back in April, The Hill included it as #5 on their list of “The 10 Senate Seats Most Likely to Flip in 2018“.

With so much on the line, and some believing President Trump’s stop to be vital for a Cramer victory, then I can’t help but wonder if a Fargo visit is enough? Or is this just the first visit with more to come?

It goes without saying that the President is a busy man. But with so much seemingly at stake, wouldn’t additional stops be worth Trump’s time in an effort to secure a Cramer victory? What about places like Grand Forks, Bismarck, Dickinson, Williston, and Minot? Of all the cities mentioned, Fargo is probably Congressman Cramer’s toughest sell. But why not just pull out all the stops— or at least a few more?

I personally think that concerns regarding Trump’s political “flirtation” with Heitkamp are a bit overblown. After all, did Senator Heitkamp end up with a cabinet position? No. When it came to her ride on Air Force One and the context of Trump calling her a “good woman”, in September of last year, I believe it was clear that he was putting her on notice— as I explained here. He wasn’t helping her re-election bid. When it came to the banking bill, Heitkamp was on his turf— not Trump on hers. It was her that was awkwardly seeking a handshake (see 20:20 mark), not him.

Aside from all of this, are voters going to forget things like Senator Heitkamp’s positions on Obamacare, the recent tax cut, her flip-flop on late-term abortions, and her 100% rating with Planned Parenthood? And that’s not all. Gun owners certainly shouldn’t forget the horrible position she took on the no-fly list in relation to gun ownership and her “D” rating with Gun Owner’s of America. In addition to all of this, some may find her support for the Iran Deal problematic. And the energy sector likely won’t forget her vote against rolling back Obama-era regulation on flaring. And then there’s the now famous “High-five Heidi” moment with Chuck Schumer after defeating the 20-week abortion ban.

Despite what some would have us to believe, President Trump isn’t stupid. When he needs Senator Heitkamp’s vote, he’ll take it. But given the choice between a Democrat who votes with him some of the time and a Republican who’ll vote with him nearly all of it, I’m certain he’ll take the Republican. Yet, in what seems destined to be a close election – in a state that has largely supported Trump – additional campaign stops in North Dakota may be helpful to a Cramer campaign that sees it as so important.

Why is Tom Campbell Afraid of His Own Voting Record?

Tom Campbell is in trouble, and his campaign knows it. The State Senator from District 19 announced his campaign for U.S. Senate last August. At the time, Campbell hoped to use his wealth to flood North Dakota with his advertisements. [read more…]

Last week I wrote that U.S. Senator Heidi Heitkamp’s re-election campaign had reached a point of embarrassing desperation. That was in the aftermath of her campaign printing an “Open Letter to Congressman Cramer” that listed the names of women they purported [read more…]

Last Thursday we broke the news that Congressman Kevin Cramer had decided against a run for U.S. Senate. There’s no doubt that Cramer’s decision came as a surprise to many– including us. Up until we received word of his decision, [read more…]