(Note: This article was originally published on Big League Politics
and has been published here on The Minuteman with permission.)
By: Tom Pappert

A Pro-Trump coffee brand has been prohibited from advertising with Amazon after using the American flag and the words “No Nonsense” and “No BS” on their advertisements.

Covfefe Coffee, inspired by the famous covfefe tweet from President Donald Trump, and made famous by conservatives including Laura Loomer, Jack Posobiec, and Ben Garrison, had its Amazon ads pulled due to the use of the American flag.

Amazon considers use of the flag a violation of its rules against advocating political parties, candidates, or causes.

After speaking to Big League Politics, Covfefe Coffee provided several emails showing Amazon describe the American flag as “not appropriate for advertising,” with one Amazon employee adding that he does not “anticipate when these products will be eligible for advertising in the near future,” indicating that this is not a new or temporary policy for the online retail giant.

In a followup email, another Amazon employee specifically told Covfefe Coffee they would need to “remove the [American] flag from the product image” and remove the words “No Nonsense” and “No BS” from the advertisements.

Covfefe Coffee was also banned from Facebook and Instagram advertising due to their nebulous new rules against political advertising.

Due to fears of Russian meddling in the 2016 election, Facebook now worries the coffee brand may be a political organization, and its advertisements considered donations to President Trump at best, or a scary Russian hacker at worst.

Covfefe Coffee told Big League Politics that its response to this type of Big Tech censorship would be to work directly with content creators, and cited their promotions with Loomer, Posobiec and Garrison, as well as others with Scott Adams, Joy Villa, and Brandon Straka. 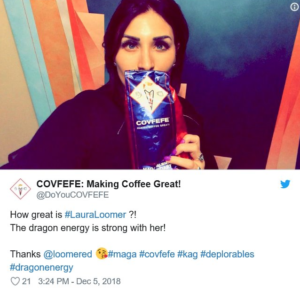 Inciting an Insurrection? Proof is in Trump’s Own Words

The amount of dishonest political gamesmanship from Democrats has reached another level of ridiculous. This time it’s found in the claim that President Donald Trump somehow “incited insurrection” with his speech at last week’s “Save America” rally in Washington, DC. [read more…]

Why Trump Stands to Lose More in Tonight’s Debate

We’re closing in on start time for tonight’s Presidential Debate between Donald Trump and Joe Biden. I’m guessing the ratings will be through the roof. But who stands to lose the most in tonight’s debate? To me, the answer to [read more…]

Planned Parenthood Responsible for Butchering a Million Babies in 2016

“The only moral goal and activity of the government is to protect natural rights. The greatest natural right is the right to life. Government’s obligation is to protect that. — Judge Andrew Napolitano Reports show that the despicable abortion advocate [read more…]