Apparently yesterday was a slow news day. Either that or some folks in the media can’t help but contribute to manufacturing outrage over a meme Rep. Rick Becker (R – District 7) posted to his official “Rick Becker for North Dakota” Facebook page. You can see it below: 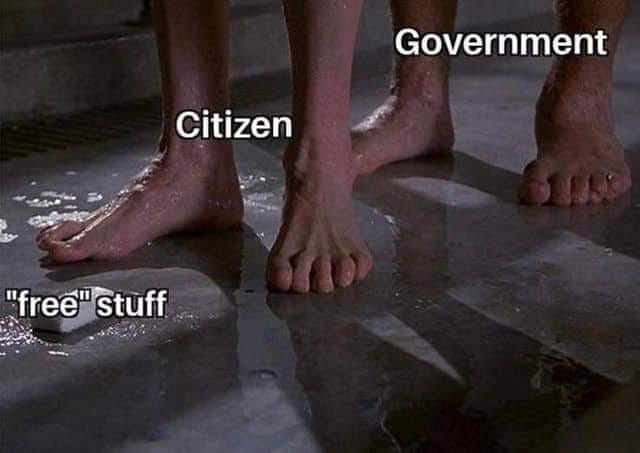 Rep. Becker posted the meme on Saturday and by Sunday KX News basically contacted everyone in North Dakota politics about it to seek comments— including House Majority Leader Chet Pollert (R – District 29) and even Governor Doug Burgum. This was all enroute to their publishing this article on the subject.

It wasn’t long and Becker was receiving threatening messages towards his businesses, together with calls for his resignation as a public official. The lunatic crowd of politically correct do-gooders was destined for disappointment as the great advocate of constitutionally limited government from District 7 responded with this on his Facebook page: 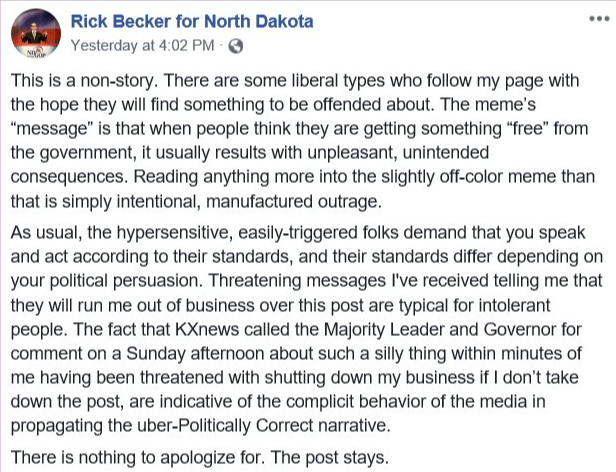 Woven into the tapestry of stupidhood from his critics was the stunningly ridiculous idea that somehow North Dakota’s Champion of Limited Government was insensitive towards victims of sexual assault and violence. Seriously. But should such a claim surprise us? After all, it came from an official statement released by North Dakota’s Democratic-NPL:

Yes, it’s true. This same party that made no effort to condemn 12 of their own Representatives, when they recently voted against a bill in the North Dakota House that seeks to prohibit babies from being dismembered in their mother’s womb, can’t help but to be triggered about a meme that truly isn’t worth a shred of outrage.

Furthermore, where were these self-appointed-morally-superior-political-posturers when U.S. Senator Heidi Heitkamp ran a campaign ad under the title “Open Letter to Congressman Cramer” with the names of women her campaign purported to be survivors of domestic violence, sexual assault, and rape? You know, that same ad that resulted in multiple women coming forward to say that their names shouldn’t have been on the list and that some of them weren’t even Heitkamp supporters. I don’t recall any outrage over that from the Dem-NPL.

No, of all people or organizations, the Dem-NPL has no moral ground in this matter— whatsoever. While these politically irrelevant, sorry excuses for a political party set out to elevate themselves to a throne of superiority, they only exposed themselves for the hysterically hostile hypocrites that they are.

If you’re interested in hearing Rep. Becker’s response to the situation, you can see it here in his interview with Chris Berg:

Controversy or "Nontroversy" Rep. Rick Becker joins us to discuss his Facebook Post that has been getting a lot of attention

Controversy or "Nontroversy" Rep. Rick Becker joins us to discuss his Facebook Post that has been getting a lot of attention. Do you feel that the MEME was offensive or not? Is Rep. Becker justified with the point he was trying to make? –Producer Josh

Constitutional Carry: Becker Had it Right & Committee Screwed it Up

A few days ago, I broke the story that a problematic oversight had been discovered in the recently passed House Bill 1169– otherwise known as Constitutional Carry. That oversight has to do with carrying a loaded firearm in a vehicle [read more…]

When Constitutional Carry was passed and then signed into law by Governor Doug Burgum on March 23, 2017, many took it as a sign that North Dakota’s lawmakers had become ultra pro-gun. And there’s no question that House Bill 1169’s [read more…]

The following article was submitted by Rep. Rick Becker. The June 2020 primary election was a doozy for Republicans. Many saw it as an example of extreme Republican intra-party fighting. I think it is much different than that. We Republican [read more…]