In January of this year, we broke the news that Legislative Council had put the finishing touches on a bill, for Rep. Luke Simons (R – District 36), that proposed a ban on taxpayer funded gun buyback programs in the State of North Dakota. That piece of legislation became House Bill 1381 during the 2019 Legislative Session and sought to accomplish four things:

1. To establish a definition of “firearm buyback program” for a new section of the North Dakota Century Code.

2. Prohibit the state, its political subdivisions, and law enforcement from participating in any gun buyback programs.

3. Prohibit taxpayer dollars from being used for gun buyback programs.

4. And to establish a penalty clause.

The bill certainly wasn’t without its critics— at both the state and national levels. Yet, after passing both the House and Senate, it was signed into law by Governor Doug Burgum.

Fast forward to where we are today and the topic of gun control is prevalent in news headlines. This, of course, is driven in large part by the recent and horrific mass shootings that took place in Texas and Ohio. One of the most talked about gun control measures are Red Flag Laws. We published an article last month explaining why we believe they should never be supported. There was even a “Shall Not Be Infringed” rally held on the State Capitol grounds, earlier this week, to express support for the Second Amendment and opposition to proposed ideas for gun control.

Yet, the hot topic over the course of the last week came as a result of comments made by Democratic presidential candidate Robert Francis “Beto” O’Rourke, at a debate in Houston last Thursday, when he was asked if he was proposing taking people’s guns away:

“I am if it is a weapon that was designed to kill people on a battlefield; if they high impact high velocity round when it hits your body shreds everything inside of your body because it was designed to do that so that you would bleed to death on a battlefield and not be able to get up and kill one of our soldiers. When we see that being used against children and in Odessa I met the mother of a 15-year-old girl who was shot by an AR-15 and that mother watched her bleed to death over the course of an hour because so many other people were shot by that AR-15 in Odessa and Midland there weren’t enough ambulances to get to them in time. Hell yes we are going to take your AR-15, your AK-47.” (Emphasis Added)

As you might imagine in a nation that has more guns than people, gun owners across the United States have voiced their disdain and opposition for the idea. Just today President Trump — who is weighing the possibility of gun control measures himself — expressed his belief on Twitter that:

“Dummy Beto made it much harder to make a deal. Convinced many that Dems just want to take your guns away. Will continue forward!”

Refusing to back down, O’Rourke responded to the Tweet himself:

“To be clear: We will buy back every single assault weapon.” 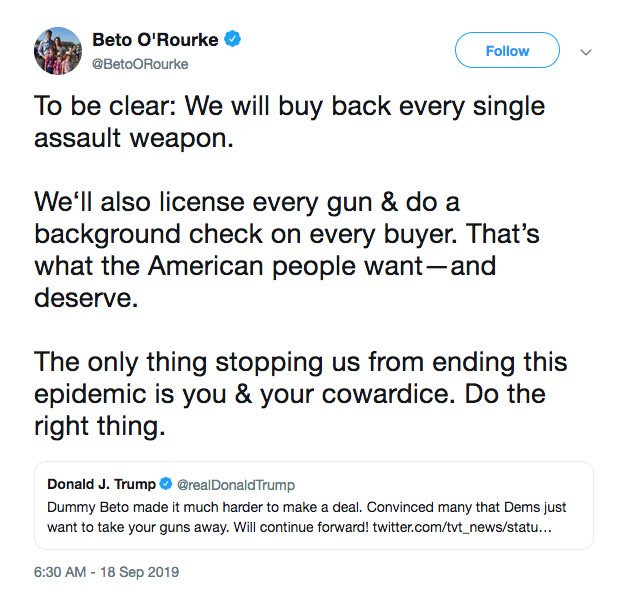 The reality is that Beto O’Rourke is simply being upfront and honest about an issue others haven’t been. He wants to take our guns— in this case, “assault rifles”. And the means by which he wants to accomplish it is through gun buybacks. By the way, the term “buyback” is actually a misnomer. How can the government buy back something that wasn’t theirs in the first place? But I digress.

Based off the reaction of gun owners to O’Rourke’s blatant honesty, I don’t foresee federal gun buyback programs becoming a reality any time soon. Heck, even many of his fellow Democrats aren’t too pleased with his comments at the moment.

Yet, when we consider the fact that gun control advocates like O’Rourke have become so bold in their agenda, North Dakota’s prohibition on gun buyback programs seems to show foresight. Think about it. If federal gun buybacks ever were to become a reality — Heaven forbid — the state of North Dakota, its political subdivisions, and law enforcement would be prohibited from assisting with them. The feds would literally be on their own.

In a sense, Rep. Luke Simons accomplished with HB 1381 what Rep. Rick Becker (R – District 7) was unable to with his HB 1309. You might recall that Becker’s bill would have prohibited the state, its political subdivisions, and law enforcement from assisting federal officials with enforcement of federal gun laws, orders, rules, or regulations that are more stringent than North Dakota’s. That bill was defeated in the House on a vote of 30-62.

Our state and its citizens are better off when we have lawmakers with the foresight of Representatives Becker and Simons. We need more like them in the North Dakota Legislature.

No, Rick Becker Should Not be the New State Health Officer

Okay, seriously. Readers of The Minuteman know how much we admire Rep. Rick Becker (R – District 7). But he shouldn’t be the new State Health Officer. Just in case you’re not up to speed, here’s a little background. Three [read more…]

In large part, the 2019 North Dakota Legislature isn’t in favor of significantly reducing the size of government and cutting — or even eliminating — certain taxes. In fact, both the House and Senate passed bills out of their chambers [read more…]

When Senator Oley Larsen (R – District 3) originally sponsored Senate Bill 2139, it was an extremely simple bill… allow those who are caught carrying a concealed weapon without their permit to produce it within ten days of the violation. [read more…]