Last night the 10 leading candidates seeking the Democratic nomination for President of the United States met on the debate stage in Houston. One of the key moments coming out of that event came from former Texas Congressman Robert Francis “Beto” O’Rourke. In responding to a question of whether O’Rourke was proposing to take away people’s guns, he answered in the affirmative:

“I am if it is a weapon that was designed to kill people on a battlefield; if they high impact high velocity round when it hits your body shreds everything inside of your body because it was designed to do that so that you would bleed to death on a battlefield and not be able to get up and kill one of our soldiers. When we see that being used against children and in Odessa I met the mother of a 15-year-old girl who was shot by an AR-15 and that mother watched her bleed to death over the course of an hour because so many other people were shot by that AR-15 in Odessa and Midland there weren’t enough ambulances to get to them in time. Hell yes we are going to take your AR-15, your AK-47.” (Emphasis Added)

This, of course, isn’t a surprise to ardent Second Amendment supporters. Despite many gun control advocates denying such a position, we know better. For the most ardent among their ranks, it has always been about confiscation. Suggesting otherwise is nothing short of disingenuous.

O’Rourke’s comments sparked a Tweet from attorney and current Republican Texas State Representative Briscoe Cain, in which he said:

“My AR is ready for you Robert Francis.”

O’Rourke responded by calling the Tweet a “death threat”. The exchange has since been removed by Twitter for violation of their rules. 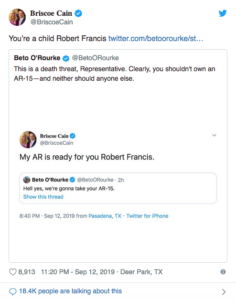 There’s little question that O’Rourke’s comments last night will amp up the debate on guns. While many in the anti-gun crowd will consider the former Texas Congressman a hero for taking such a stance, I’m not sure he did himself, or the gun control movement he’s a part of, any favors. Gun confiscation is a very serious thing. It’s what many of us have warned about for years— even decades.

If someone like Beto O’Rourke ever assumes the presidency and attempts to implement the type of policy he’s advocating for, I’m afraid it won’t end well. (By the way, that’s not a threat of any sort.) While he seemed to be speaking specifically to what he would call “assault weapons”, let’s not forget that overall there are over 390 million guns in the United States. And that’s with a population of just over 327 million people. Would Americans just roll over for such a gun grab? What are the implications of allowing something like that to happen?

Despite our present challenges, I still believe we are the greatest nation upon the face of the Earth. But that simply cannot be the case if we allow the destruction of our Second Amendment rights. For that reason alone, we must see to it that a person like Beto O’Rourke never assumes the presidency.

But hey, I’ll give him credit for at least being honest.

If you’d like to attend the “Shall Not Be Infringed” rally in Bismarck on Sunday, September 15th, you can find more information about that event by clicking here. We encourage your presence.

(Note: The reference to never permitting someone like O’Rourke to assume the office of the presidency is not intended to be a call for assassination. It is expressed in terms of the electoral process. I feel the need to be specific about that for our friends on the left who might like to interpret it otherwise.)

Two weeks ago, we published an article blasting eight Republicans who joined two Democrats on the awful House Bill 1537— otherwise known as the “Red Flag Bill”. I highly recommend you read our previous article and the bill itself. In [read more…]

Last October, in the aftermath of the horrific shooting in Las Vegas, we published an article in which I suggested that the goal of the anti-gun lobby is much deeper than banning silencers or bump stocks. Prior to the Vegas [read more…]

Earlier this week, we broke the news about a bill set to be heard during the 2019 Legislative Session that seeks to prohibit state agencies, political subdivisions, and law enforcement of the state from participating in the implementation, administration, or operation [read more…]