I can’t think of a hotter topic in North Dakota politics this summer than the one relating to the North Dakota Legislature’s efforts, during the winding up moments of the 2019 Legislative Session, to strip our State Auditor of his authority to initiate performance audits. Not only was it bad in and of itself, but the way in which it was done was even worse— as a last minute amendment in conference committee.

To illustrate how last minute — and sneaky — this was, there were Senators who said they didn’t even know it was in the bill. I’ll leave it up to you whether you believe them or not, but not a single Senator voted against the legislation. In fact, it wasn’t until the bill reached the House, and Rep. Jeff Magrum (R – District 28) blew the lid off the issue, that we knew the full implications of what was going on. And even then it didn’t matter. The House adopted the amendment, passed the bill 72-20, and Governor Doug Burgum signed it into law.

How things unfolded after that were interesting. You can read everything we ever published on the issue here. Some of the comments by certain state officials alone left many shaking their heads. There was one lawmaker who admitted to some wanting to “reel in” the State Auditor, dumb comments by the governor, and the Senate Majority Leader who couldn’t keep his story straight of whether they knew about the amendment. From the perspective of a political blogger, it was the gift that kept on giving.

Amidst all of this, there was a referral effort put in place under the banner of “Audit the Swamp”. The branding was spot on— you can see it on their Facebook page here. The cartoon logo of a Cactus Guy with money all around him — no doubt referring to millions of wasteful spending on a cactus garden — was brilliant. The Audit the Swamp logo, with the State Capitol made a part of it, was a stroke of genius. Within a short time, they had nearly 800 Facebook followers. 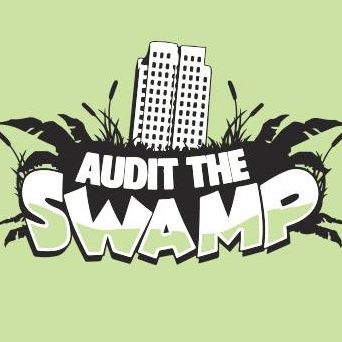 Yet, when it comes to politics, branding isn’t everything. When all was said and done, efforts to refer the Legislature’s power grab of the State Auditor to a vote of the people fell short.

In reflecting upon this, I think there were multiple factors that led to the referral effort not getting the needed signatures:

For now, we wait and see how things play out. As a result of the AG’s opinion, State Auditor Josh Gallion has already stated numerous times that he will ignore the law Wayne Stenehjem says is likely to be found unconstitutional. And as we explained in a previous article, he’s right for doing so.

Unless something happens between now and 2021, things should be fairly interesting during the next Legislative Session.

On September 30th, State Tax Commissioner Ryan Rauschenberger was pulled over and arrested for a DUI — with a blood alcohol level of nearly three times the legal limit. That event flew under the radar of the media until it [read more…]

Last Thursday, we published an article discussing the fact that the North Dakota Senate had taken the first step of overriding Governor Doug Burgum’s veto of Senate Bill 2244 by a vote of 41-4. The bill proposed doubling commercial and [read more…]

The final district reorganization meeting for the North Dakota Republican Party took place last night. Conservatives in District 30 came away victorious. Though the sometimes contentious reorg season has drawn to a close, I think it’s safe to say that [read more…]