One of the hot topics in the nation is abortion. A little over two months ago, the controversial film “Unplanned” was released in theatres. I believe it’s changed the debate regarding the issue. Alabama, Georgia, Illinois, and others have all made headlines with abortion legislation. The debate runs the gamut between fetal heartbeat laws to the nauseating move by Illinois to repeal the state’s ban on partial-birth abortion. There’s much to be done in order to protect the unborn.

Even North Dakota is among those who’ve recently passed controversial pro-life legislation. In addition to this, we’re one of six states with just one abortion clinic. Make no mistake about it, we need leaders who clearly understand their role in the ongoing battle to defend those who literally cannot defend themselves.

With all of this as a backdrop, you will understand how disappointing it was to have a reader of The Minuteman send me this: 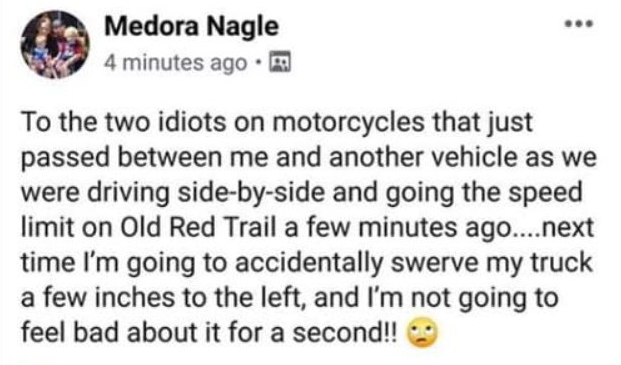 It’s a recent Facebook post by the Executive Director of North Dakota Right to Life. I think it’s safe to say that threatening to swerve her truck into “idiot” motorcyclists, as retribution for their poor decisions, isn’t exactly a good idea. And it most certainly isn’t what we’d expect from someone representing an organization that is “dedicated to protecting the lives of every human life from fertilization to natural death.”

There’s little doubt that Medora Nagle posted what she did in a moment of frustration. And there’s no question that it’s not representative of the organization that she works for or the movement she advocates on behalf of. But that’s actually the point. Can she be trusted to effectively lead with gaffe’s like this? Is it a black eye for the pro-life movement in North Dakota? At the very least, does it call into question her credibility?

Answer as you will, but I’m not sure the responses are encouraging.

Nearly a year ago, I got wind that legislation was in the works to make North Dakota a Sanctuary State for Life. In other words, some lawmakers want the state to tell the federal government to go pound sand on [read more…]

Lawsuit From ND Abortion Clinic is About Protecting Their Industry, Not Women

Is Infighting at ND Right to Life Distracting from their Mission?

Back in June of 2019, I wrote about the oldest pro-life organization in the state, North Dakota Right to Life (NDRL), and its current Executive Director Medora Nagle. Ms. Nagle had posted a remark on Facebook about swerving to hit [read more…]