One of the most contentious bills of the recently completed 66th Legislative Session was Senate Bill 2315. This, of course, was the bill that dealt with the issue of whether landowners should have to post their property. Some referred to it as the “Posted North Dakota” bill.

If you check the archives of The Minuteman Blog, you’ll find that we only published one article about the legislation this session. That might seem odd for a site such as ours. After all, we’re advocates of private property rights and actually believe that landowners shouldn’t have to post their property.

The fundamental reason behind our not covering SB 2315 anymore than we did is simple— the bill changed so much that it was very difficult to follow. A look at the “Bill Actions for SB 2315” on the North Dakota Legislative website shows 13 committee hearings were held on this issue. The “Bill Versions for SB 2315” comes in at five— if I’m seeing it correctly. And heaven only knows how many drafts it went through to get to that number.

In the beginning, SB 2315 was a fairly typical “Posted North Dakota” bill. Then they added an electronic posting element. They later worked in a study with a committee to be appointed by Legislative Management. There was even an educating and marketing element to be carried out by the North Dakota Game & Fish Department to educate the public if the bill passed. And there was a whole lot more. In the end, I suspect some legislators’ heads were spinning— unsure exactly of what was being proposed. I imagine most just wanted the entire thing to just go away.

If you’re still unconvinced of just how crazy things were, take a gander at the “Bill Videos for SB 2315“. Between the two chambers, it shows speakers getting up 69 times during floor debates. At one point in the House, they even divided the bill into two sections and voted on them separately as a means of attempting to save the legislation.

And what did landowners get in the end for all of this? Nothing different. When the votes were tallied, it died in the House on a vote of 44-48 and existing law remains.

When I wrote last month’s article, I quoted from Rep. Kathy Skroch’s (R – District 26) comments on the House floor:

“It has been said that this can has been kicked down the road— and kicked down. What my landowners are telling me in my district is that, ‘We’re going to take that can, we’re going to fill it full of cement, and put a No Trespassing and No Hunting sign on it and lock this land up so tight that no one will have access!’”

Rep. Luke Simons (R – District 36) expressed similar thoughts in a floor speech of his own.

And so it seems their words may end up being prophetic. One thing to develop out of the debate on this issue is a Facebook page known as “North Dakota Lock Out – Restore Private Property Rights“. Their mission is emphatically stated as follows:

“Our mission is to Restore the Private Property Rights of ND Property Owners, especially those who own rural and agricultural land. Senate Bill 2315, introduced in the 2019 Legislature, would have done this as a stand alone bill making ALL private lands ‘posted’ and requiring everyone who is not an owner of the property to obtain permission to enter anybody’s private land for any reason. This would have helped to put some ‘teeth’ in the current trespass laws of the ND Century Code, improve landowner/hunter relations, and restore the privacy and rights of private property owners. The state of ND had no authority to grant public access to private land if there was no sign posting that land closed to trespassing and is a direct violation of the eminent domain clause within the 5th Amendment. This never was an anti-hunting bill, but a PRIVATE PROPERTY RESTORATION BILL and one that would have shown respect of other peoples property.

“The Mission is Simple: NO HUNTING – NO TRESPASSING – DON’T ASK, locking out private property acres to the public until the private property rights are restored in North Dakota!” (Emphasis Added)

As you can see, the method to accomplishing their mission is exactly what Representatives Skroch and Simons warned about— to lock the land up so tight that no one will have access. This post explains it even further: 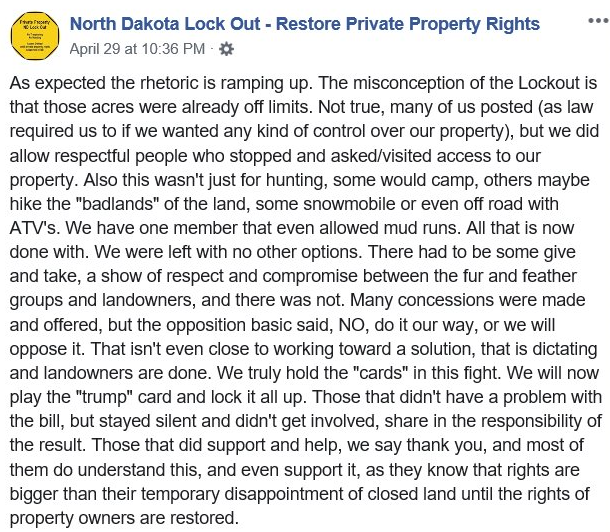 When I wrote about this issue nearly a month ago, I saw the writing on the wall. I even pleaded with fellow hunters that there was still time to remedy this— to build a bridge instead of widening the chasm. Unfortunately, that didn’t happen. And as a result, it appears things may get very difficult for a significant number of hunters this fall.

As of this writing, there are 583 followers — and growing — on the aforementioned Facebook page. Some might pretend that’s not a large number, but I’m guessing that the amount of acreage represented by those followers is huge. And hunters simply aren’t going to have access to it any longer.

And to think that this could have all been avoided. It’s a sad period in the history of North Dakota.

Earlier this week, we broke the news about a bill set to be heard during the 2019 Legislative Session that seeks to prohibit state agencies, political subdivisions, and law enforcement of the state from participating in the implementation, administration, or operation [read more…]

ND Legislature Better Get Their Crap Together on the Gun Issue

I’m not going to mince words here. The North Dakota Legislature — as a whole — needs to get their crap together when it comes to gun rights and nullification of federal overreach on the issue. About two years ago, [read more…]

Just eight days ago, I wrote that dental therapy should be legalized in North Dakota. A dental therapist is a licensed oral care professional who works in conjunction with a dental care team to provide clinical and therapeutic care. Some [read more…]