Last month the North Dakota House defeated House Bill 1537— otherwise known as the “Red Flag Bill”. This legislation would have enabled a law enforcement officer to obtain a search warrant and seize an individuals firearm if they submit a sworn affidavit stating that they believe the person is “dangerous and in possession of a firearm”. The devil was in the details of the bill.

In the aftermath of its defeat, we published an article suggesting that we may not have seen the last of Red Flag legislation in North Dakota. That was based off of comments in the floor debate before it was defeated. Outside of this, it appears Americans as a whole may have a much more immediate problem with this issue as Ref Flag is being considered at the federal level.

U.S. Senator Lindsey Graham (R – South Carolina) recently told CNN that the Senate Judiciary Committee — of which Graham is chairman — will hold a hearing on gun control legislation on March 26th. It’s expected that this hearing will cover Red Flag Laws that have passed in other states. But that’s not all.

Senator Graham has been a supporter of this kind of gun control in the past. As you can see on his own website, he worked on bipartisan Red Flag legislation with Senator Richard Blumenthal (D – Connecticut) after the Parkland shooting last year, but at the time it never gained the traction to become law. Unfortunately, it doesn’t appear Graham’s ambitions are dead.

One of the most troublesome aspects to this issue is that Senator Graham isn’t the only high profile Republican to support such awful legislation. Senator Marco Rubio (R – Florida) has proposed similar legislation and even President Trump made his now infamous statement, “take the guns first, go through due process second.”

Today, the Gun Owners of America called Senator Graham’s proposal “the most dangerous bill of the 116th Congress” and urged readers to contact their Senators to oppose such legislation. They’re right in doing so. Those who support Red Flag Laws are deserving of the scorn they incur— and yes, that includes President Trump. 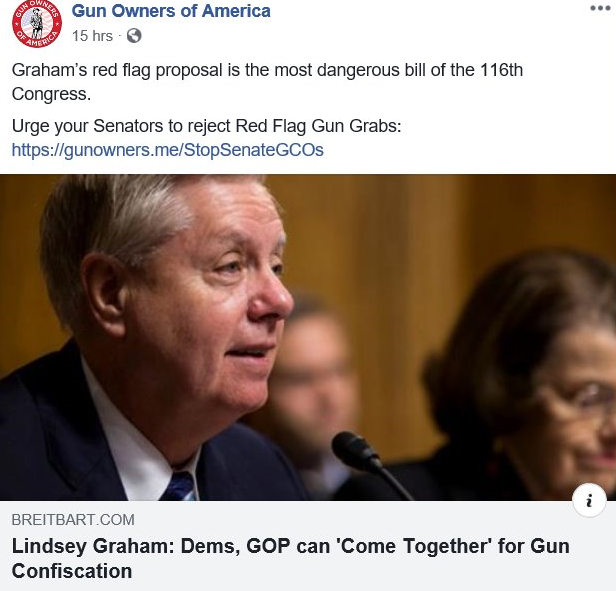 As a consistent voice of reason — and as an advocate of limited government — these developments caused former Congressman Ron Paul (R – TX) to weigh in on the issue during an episode of his Ron Paul Liberty Report today. Needless to say, Americans across the country need to be vigilant by contacting their Senators and urging them oppose Red Flag legislation. Congressman Paul’s video on the subject can be viewed below.

Bipartisan Attacks on the Second Amendment

Bipartisan Attacks on the Second Amendment


About T. Arthur Mason 859 Articles
T. Arthur Mason is a native North Dakotan who has spent nearly all of his life in the Peace Garden State. As the third of four children in Western North Dakota, Mason grew to appreciate family and the outdoors. Some of his fondest memories are annual deer hunts with family and friends. In his early teenage years, faith became a central part of T. Arthur Mason's life. He and the majority of his family attend church together on a weekly basis and find this a fulfilling aspect of their lives. Through the influence of his father, T. Arthur Mason became intrigued with politics. As a boy, he attended political events with his father and enjoyed the friendships that resulted as a byproduct of those political associations. As Mason grew older, he became convinced that the quote often attributed to Thomas Jefferson was true, "That government is best which governs least." Today, T. Arthur Mason enjoys time with his wife and children, an occasional hunt, and an increasingly active life on the political scene. This blog is the fulfillment of a dream to design a web site in the realm of politics and to advocate for the principles of Liberty and constitutionally limited government. On behalf of all those that contribute to The Minuteman, we hope you enjoy your time on the site and will share the message with others.

Last October, in the aftermath of the horrific shooting in Las Vegas, we published an article in which I suggested that the goal of the anti-gun lobby is much deeper than banning silencers or bump stocks. Prior to the Vegas [read more…]

It’s nice to be #1— usually. Take for example the North Dakota State Bison football program. The Thundering Herd have enjoyed national attention for years now. ESPN has even broadcast games from our beloved state on more than one occasion. [read more…]

Rep. Rick Becker (R – District 7) is about as pro-gun as they come in the North Dakota State Legislature. The Father of Constitutional Carry in North Dakota is proving this once again by proposing House Bill 1383. If passed, [read more…]