While we were unpopular with some folks for publishing them, there were others who came forward with additional stories. Among them were allegations, from an anonymous source, of illegal drug activity. At the time, we chose not to publish those allegations, because we could not verify the source or where the pictures they sent to us came from.

It now appears that there may be something to the allegations. Early this morning, the Bismarck Police Department’s Drug Unit and the Metro Area Narcotics Task Force conducted a raid on Lucky Duck’s, The Pond, Avery’s AM Eatery, J60, and The Vault. According to the news report, authorities “were looking for controlled substances, drug paraphernalia and signs of drug trafficking.” No arrests were made and the investigation is ongoing.

As a whole, none of this reflects well on Kadlec Enterprises, LLC or the City of Bismarck. As you may recall from a previous article, Kadlec received approval for their renaissance zone project in September 2013— at the very location that was raided this morning. These types of projects are nothing less than cronyism— a form of subsidy in which the local government picks winners and losers.

In light of these events, we are going to post the pictures below that were sent to us last year: 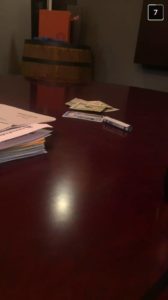 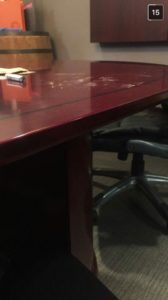 As you can see, the first picture shows cash, something rolled up into a tube, and an ID of some sort on the desk. The second shows what appears to be a powdery substance on the same desk with the cash, tube, and ID still there. If you have any information in regards to this investigation, please contact the Bismarck Police Department at 701-223-1212.

On October 15th the Bismarck Tribune reported that an officer from the Bismarck Police Department had shot and wounded a man in an altercation . We now know that man to be 51-year-old Donald Joseph Miller. Their article described the events [read more…]

A few days ago, the Gainesville Police Department in Florida posted the following picture of three of its officers on its Facebook page with this caption: “Officers Nordman, Hamill and Rengering…part of the night crew getting ready to do some [read more…]

Last year we published two articles about questionable activities taking place in Bismarck’s downtown renaissance zone. The first had to do with a male strip show and the other about a rape drug allegedly being slipped into the drink of [read more…]