Last week we published an article that asked the question, Does the State Really Need to be Involved in Funerals? In it, I explained that the State of North Dakota actually has a State Board of Funeral Service. You can read the article for yourself, but in a nutshell they’re a licensing and regulatory body for funeral homes in the state.

In addition to this, I also explained that HB 1078 is being proposed as a means of implementing stricter requirements for those seeking to intern as embalmers. And not only that, but one of the sponsors is Rep. Mike Nathe (R – District 30), who also happens to be the Funeral Director/Owner of Bismarck Funeral Home and Crematory. In essence, the bill actually makes obtaining a certificate of registration more difficult for Nathe’s potential competitors.

Well, the House voted on the bill today, and it was no surprise that it passed without much opposition. The final vote was 77 – 15.

Leading up to the vote, one reader of The Minuteman actually contacted Rep. Nathe about the bill. You can see his response below: 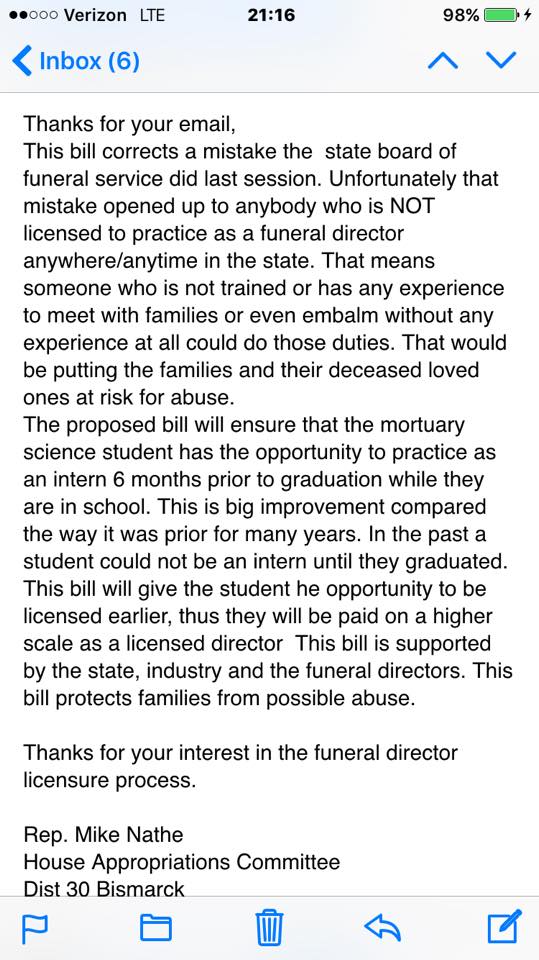 At risk for abuse? Seriously? First of all, I’m not sure about you, but everyone I know typically uses a reputable funeral home when making preparations to honor their deceased loved ones. Does Rep. Nathe honestly believe we’re going to have a flood in the market of registered intern embalmers who are going to willy-nilly carry out these responsibilities? It’s almost laughable. Yet, even if there was the occasional circumstance of someone who tried, isn’t it the responsibility of the families to do their due diligence by ensuring who’s caring for the deceased? I think so.

Beyond this, Rep. Nathe didn’t really tell the entire truth of the matter either. Current law actually provides authority to the aforementioned State Board of Funeral Service to bring disciplinary action against anyone proven to be unfit to practice funeral service. That authority is found in the very next section to the one that HB 1078 is seeking to amend:

43-10-16. Grounds for disciplinary action – Reimbursement of costs. The board may revoke, suspend, place on probation, or refuse to issue a license to practice funeral service or certificate of registration as an intern embalmer upon proof at a hearing that the applicant, licensee, or certificate holder:

1. Is unfit to practice funeral service.
2. Has violated this chapter or the rules of the board.

The board may impose a fee on any person or other legal entity subject to regulation under this chapter to reimburse the board for all or part of the costs of administrative actions resulting in disciplinary action, including the amount paid by the board for services from the office of administrative hearings, attorney’s fees, court costs, witness fees, staff time, and other expenses.

So, there is a price to pay for those dumb enough to try to be something they are not.

The reader who posted Rep. Nathe’s response actually made a very compelling point regarding the nature of internships as well:

“The purpose of this internship used to be to ensure the person had an understanding of the profession before committing time and money to a program. Now, they need to commit a considerable amount of time and money only to later realize it might not be a good fit for them.”

I think this is spot on. And this is just one of the reasons I not only believe that the bill should be defeated, but the state should be removed from the equation entirely.

As I alluded to in my article last week, I’m not writing about this because I have a vested interest in the profession itself. But it’s a great example of regulation that we simply don’t need. And it’s not the only one. That’s why we have a government that’s bigger than it should be.

The bill will now go to the Senate for consideration. I’m guessing that it’ll get no more than two opposing votes there— if any at all.

An American Tradition: Can Barbering be Saved by Trimming the Government?

“Today – I want to sing the praises of a true American. A man’s man… and true hero in every town, hamlet, village and city in this country. Today – let’s take a minute and thank – the barber.” [read more…]

Have you ever taken a look at North Dakota’s alphabet of state agencies? If you haven’t, I highly recommend it. You can see them here. I took the opportunity to take a quick look recently, and it’s quite an eye-opening experience. [read more…]