Last week we published an article that featured Independent Secretary of State candidate Michael Coachman. As part of that article, I briefly laid out the odd twists and turns that have made the Secretary of State’s race one of the most interesting of the 2018 election cycle. As if things couldn’t get any stranger, a reader of The Minuteman sent me pictures of this mailer they received that same day. 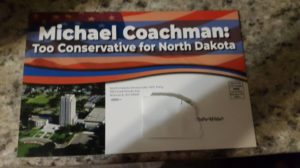 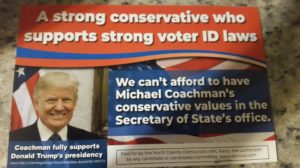 As you can see, it appears to be an attack on Coachman. And interestingly enough, it was paid for by the Democratic-NPL. While some folks in Republican circles have chosen to be insulted by the tactic, I have to give Democrats credit for their creativity. It seems obvious that it’s an attempt to split the Republican vote between incumbent Al Jaeger and the lesser-known Michael Coachman in hopes of putting their nominee, Rep. Joshua Boschee (D – District 44), over the top when votes are counted on November 6th.

Not to be deterred by the criticism from some people, Democrats sent out a second Coachman mailer, just days later, that was much along the same lines as the first. Only this time it pit Coachman as “The Real Conservative Candidate” and Al Jaeger as “Rejected by the Republican Party”— which actually has some truth to it. The difference here is that there’s no attack from the Democrats. They are simply — and shamelessly — campaigning for Coachman. 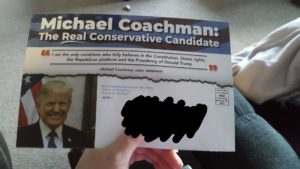 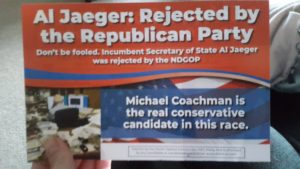 As if a second mailer wasn’t enough, they’ve now sent a third. 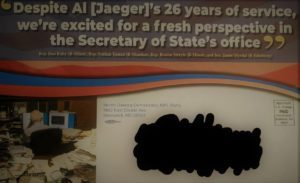 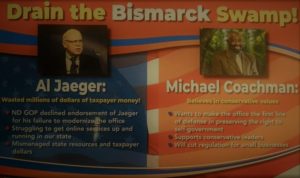 There’s certainly a lot of truth to this mailer. Jaeger was indeed rejected by Republicans at their State Convention in April. And it wasn’t by just a little bit. Will Gardner walloped him by a delegate count of 679 to 438 for the endorsement. Of course, that was before Gardner had to withdraw his nomination after winning the June primary. And yes, the defeat was undoubtedly due to Jaeger’s failure to modernize the office and for perceived inefficiencies.

Now, to be fair, the Democrats were outright deceitful on the third mailer. It quotes State Representatives Dan Ruby, Nathan Toman, Roscoe Streyle, and Janne Myrdal as saying, “Despite Al [Jaeger]’s 26 years of service, we’re excited for a fresh perspective in the Secretary of State’s office.” It’s true that they made the statement. There’s just one problem— it was lifted from an endorsement they printed in April of this year for Will Gardner, not Michael Coachman.

Aside from political games and deceitfulness, there’s actually another very important takeaway to be had from all of this. It’s found in the first mailer in which Democrats make this statement about Coachman, “A strong conservative who supports strong voter ID laws.” That’s followed by, “We can’t afford to have Michael Coachman’s conservative values in the Secretary of State’s office.” To me, this indicates that North Dakota’s Democrats don’t support strong voter ID laws. Of course, that’s no surprise to most of us. But here they’re pretty much admitting to it. Not only is that an indictment on the Democratic-NPL, but it certainly doesn’t reflect well on their candidate Joshua Boschee.

Did Democrats somehow forget that there’s quite a few voters who consider themselves Independents? And many of them — like Coachman — support strong voter ID laws. It’s one thing to try and split the Republican vote, but alienating some of the very people they absolutely need to vote for Boschee certainly doesn’t help his candidacy.

As a side note to all of this, I’ve heard from quite a few Republicans who plan on casting a protest vote for Boschee. Why? Because they’re unhappy with Al Jaeger. I understand the dissatisfaction with Jaeger, but why not take it and cast a vote for Coachman? Who knows, between the unhappiness with Jaeger and the Democrats free campaigning, maybe Coachman could shock the political establishment in both parties. Long shot? Perhaps. But what do we have to lose? If our other choices are between more of the same and a Democrat, I’ll take Coachman every time.

One of the many Executive Orders signed by Governor Doug Burgum, in response to COVID-19, has left North Dakotans with a mail-only primary election. And there’s a lot of people unhappy about it. To be clear, at the end of [read more…]

The North Dakota Legislature is in the midst of a three day organizational session this week. The session opened Monday and will conclude today. The regular 2019 Legislative Session is set to convene on January 3rd. Aside from the organizational [read more…]

A Document to Help Political Campaigns to Comply with Election Laws

We continue to have readers contact us with alleged violations of laws regarding political campaigns. For example, of a more serious nature, we’ve written in the past about Bismarck Mayor Mike Seminary and what appears to be multiple violations of [read more…]