There has been accusations made that Bismarck Mayor Mike Seminary is violating the state’s Corrupt Practices law by using property belonging to the City of Bismarck for campaign purposes. In addition to this, he’s also used city employees and school property— both of which are violations as well. The evidence appears obvious and undeniable. I have posted a video breakdown of the accusations below:

As you can see, Seminary has included footage of his work as mayor and what seems to be campaign material made while working in his official capacity as Mayor of Bismarck.

When we think of government corruption, we think of politicians using taxpayer dollars and their positions for personal gain. Yet, the Corrupt Practices law in our state clarifies this:

“CORRUPT PRACTICES 16.1-10-02. No person may use any property belonging to or leased by, or any service which is provided to or carried on by, either directly or by contract, the state or any agency, department, bureau, board, commission, or political subdivision thereof, for any political purpose.

“2. b. ‘Property’ includes motor vehicles, telephones, typewriters, adding machines, postage or postage meters, funds of money, and buildings.
“2. c. ‘Services’ includes the use of employees during regular working hours for which such employees have not taken annual or sick leave or other compensatory leave.”

The city seems to understand this. You can see a screenshot of the City of Bismarck’s Facebook page explaining it to a reader below: 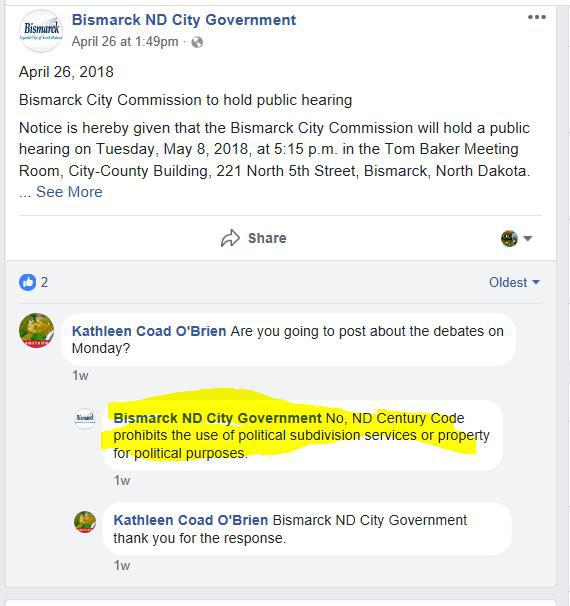 Let’s take a look at the three points that seem to be the most obvious violations.

It starts with him going to Horizon Middle School for the Vision 2030 event. You can clearly see Mayor Mike Seminary and Bismarck City Commissioner Shawn Oban at the event, where they are acting in their official capacity as paid employees of the city. This event is not intended for political purposes, but clearly in this video it is being used as such. Remember, the video starts with “Re-elect Seminary for Mayor”.

As the video goes on, we see Seminary once again filming himself and being filmed by some other person at another official event. This time it was at Legacy High School for a chef cook off. Seminary starts by entering a political subdivision’s property while making a selfie-style campaign video. This while also working in an official capacity as mayor. The view then switches to someone filming him as he continues his work at the school.

Both of these clips beg the question, “Who filmed it?” Did the mayor use city staff, such as Gloria David – who has been seen videoing him at his Coffee with the Mayor events – or was it some other city employee? If so, then this person also violated the Corrupt Practices law by filming campaign material “during regular working hours”.

If this was not filmed by a public employee, did Mike Seminary bring campaign staff with him to the events for the purpose of making political campaign material while working as mayor?

The final clip that stands out to me is in Seminary’s second video:

Halfway through we meet Nevin Fetzer, who is job shadowing the mayor. So, in the video, we have it confirmed by Seminary himself that this is work time on government property. Not only that, but he is using this as an opportunity to create campaign material. This is nothing short of an abuse of power and a clear example of using his position as mayor to access government property and services for the purposes of his campaign.

Again, we wonder, “Who filmed this?” Did he bring campaign staff with him to City Hall? Or was this a city employee? Regardless, both answers are clear violations of Corrupt Practices, but an investigation will be needed to answer the question, “Is this just the mayor breaking the law or did city staff participate as well?”

This isn’t the first time the city has campaigned for the mayor. Back on May 14th, we published an article about the City of Bismarck sharing Mike Seminary’s campaign material— before removing it from their Facebook page.

At some point, law enforcement needs to investigate this ongoing corruption and misuse of government funds, staff, and property.

Will there be justice? During the effort to recall Mayor Seminary last year, local law enforcement called in the Bureau of Criminal Investigation (BCI) to conduct an investigation regarding the petitions. Will those in positions to enforce the law provide cover for the mayor instead? Or will they scrutinize him in the same way citizens and taxpayers were scrutinized when it came to the recall?

An example of actual consequences being associated with violating the Corrupt Practices law can be found in a recent case where BCI was called in to investigate in McKenzie County. In that case, Alexander City Councilman Jerry Hatter resigned his seat in order to settle his case. Hatter’s violation came in the form of a bedsheet, hung from a fire truck, with the words “Vote for Hatter” painted on it in a local parade. This was a one-time occurrence, not repeated violations like those found in the case of Mayor Mike Seminary.

A left-wing group known as “North Dakotans for Public Integrity” is currently circulating a statewide petition to apparently fight corruption. We questioned whether this initiated measure is being used as a tool to turn out Democrat votes? Failure to investigate and prosecute repeated violations like those made by Mike Seminary may add fuel to the fire for such a ballot measure. If local authorities fail to enforce the law, then the people will have no choice but to create a government body to specifically root out corruption.

Now, I only covered the top three issues in the complaint made. But we plan to cover the rest of the issues in future articles. In the meantime, I encourage you to watch the videos and see how many violations you can count.

Two days ago, the Administrator for the City of Bismarck, Keith Hunke, held a press conference to announce that the recall election of Mayor Mike Seminary would not be moving forward. Hunke gave an overview of disqualified signatures. Among them [read more…]

Supporters of the 2nd Amendment, from across North Dakota, are expected to gather at the State Capitol tomorrow in Bismarck. This gathering is just one of many that will take place across all 50 states. It is known as the [read more…]

For Bismarck Mayor Mike Seminary, it’s one thing to try to show strength in the face of adversity. It’s quite another to show blatant disregard for those who may well boot him from the office he currently holds. Last week [read more…]