Note: Authored by and published with the permission of Tony Gehrig.

Special assessments or “specials” have been around for a long time in Fargo. So long that people have come to accept them as an unchangeable reality. Despite being around since well before I was born, there are still some dirty little secrets that you probably don’t know about, and the proponents don’t want me talking about:

1) Up to a 30% “engineering and administrative” fee – For every project we special assess, we tag on an administrative fee because, well, we can. That fee usually falls between 15% and 30%. That means if you have a $50,000 special, $15,000 could be nothing more than a fee from the government for no good reason, and you probably won’t know enough to ask about it. What does it do? Nothing.

2) The interest rate – Until 2017, when the city would hand you your special assessment, we would tag on 1.5% to your interest rate. So, if the city got the loan for 3%, you would be paying 4.5%. That changed in 2017 after many residents started to notice the higher rate, it was lowered to 1%. The mayor has come out and said we should move that down to 0.5%. My question is, if we could have gone from 1.5% down to 0.5% all along, why didn’t we do it until now? Simple answer is, because no one noticed what we were doing so we charged you more.

3) The government can refinance, you can’t – Speaking of interest rates, the city can refinance our special assessment debt to get a better rate. For example, a couple years ago we received a 2% rate after refinancing from a higher rate. We are now paying much less on our debt. Do you think you are paying less because we are? No, because even if we refinance, we don’t lower your original rate. So you might be paying 6% to the city while we are paying 2% back to the bank on the same loan, because we can and you don’t know any better.

4) $450 million – Speaking of debt, Fargo is in debt $450 million due solely to special assessments. We are playing the bank and holding debt in your name. This is a very dangerous position to be in and there is no good reason for it.

There is one simple way to make sure these dirty little secrets don’t continue happening. End all specials. Good news is, I have released a plan to do just that.

***Tony Gehrig was elected as a Fargo City Commissioner in 2015 and is running for re-election in the upcoming June 12th primary election. You can see his website by clicking here and read his bio here. His voting record – and why he voted like he did – can be found here. 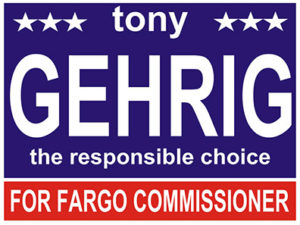 In March of last year, we published an article titled, “Sexploitation: Kids Drag Show Planned in Fargo“. As you may recall, a group known as the “Hot Mess Harlots” were scheduled to “instruct the kids on what it means to [read more…]

There’s a lot of really dumb things that go on in politics. But Fargo City Commissioner Dave Piepkorn’s comments about his colleague Tony Gehrig, earlier this week, really take the cake. They were nothing short of idiotic. To give you [read more…]

A Visitor from the Past

A VISITOR FROM THE PAST I had a dream the other night, I didn’t understand. A figure walking through the mist, with flintlock in his hand. His clothes were torn and dirty, as he stood there by my bed. He [read more…]