The Bismarck Tribune reported just two days ago that North Dakota’s first abortion clinic is set to be demolished. It’s a fitting end for a building that carried out the demolition of the unborn from 1981 to 2001 under the name of “Fargo Women’s Health Organization”.

As part of their article, the Tribune recalls the April 1992 firebombing that took place there, which resulted in a fire and charring of the building that’s still visible today. Jane Bovard – the clinic’s founder – recalls that, “It’s more scary looking back on it now than when I was living it.” Such a statement is striking coming from someone whose been instrumental in killing the unborn. To her, apparently, that wasn’t scary at all. Her comment illustrates a deeply saddening moral disconnect.

Coincidentally, news of the impending demolition of North Dakota’s first abortion clinic came at the same time I was reflecting upon something I wrote about two years ago under the title, “Being Pro-Life Does Not Require You to be a Religious Person”:

One of the common misconceptions I hear about the pro-life argument is that it’s driven by religion. For many of us, this may be true. Yet, advocating for laws against abortion doesn’t mean one has to be religious. In fact, it doesn’t mean you have to believe in God at all. To illustrate this, I’ll share an example I thought of a few years ago.

Suppose there was a building that was going to be demolished. The owner of the building simply didn’t want it anymore. Professionals were hired to come in and utilize explosives in its demolition. The preparatory work was done, the explosives were placed, and the moment had arrived to demolish the building. Before setting off the explosives, one important step was required to take place— a final check must be done to ensure that no one was inside the building.

Let’s suppose that just prior to setting off the explosives someone said, “I think someone is inside of there!” What would you do? Would you set off the explosives anyway? Of course not. No responsible person would hit that button. Why? Because there is the possibility of a life inside the building and no right-thinking person would want to be responsible for ending an innocent life. Not even the non-religious or those that don’t believe in God.

Now, let’s consider the abortion issue. The pro-life and pro-choice sides have one fundamental question they cannot agree on. That is the question of, “When does life begin?” Both sides can butt heads until they have migraines, but seldom does one side convince the other. I likely can’t prove to you when life begins anymore than you can prove to me that it doesn’t. Yet, is defining that moment in time absolutely necessary? I don’t believe so. 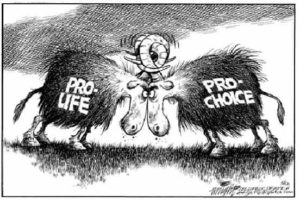 Do you remember in my example of the building why they didn’t demolish it? It was because of the possibility of life inside. It’s the same for abortion. By virtue of the fact that we cannot prove when life begins, we must err on the side of life. Why? Because being unable to prove there isn’t life also means there is a possibility of life. And like the building, no right-thinking person would want to be responsible for ending an innocent life. Not even the non-religious or those that don’t believe in God.

Abortion is the great atrocity of our time. It is estimated that 893,000 abortions were performed in the United States in 2016. The one thing that so many cannot agree on (when life begins) should result in the one thing that we can— so long as the possibility exists that it’s a life being ended, we should refrain from ending it. That’s what responsible people would do.

Since writing that just two years ago, I’ve gained an even stronger conviction that abortion does indeed end life. In fact, the very act of abortion itself proves it. If abortion doesn’t end a life, then why would those who support it believe it to be necessary in the first place? If there were no life, there would be no need for abortion.

Tammi Kromenaker – a former employee of Fargo Women’s Health Organization and now Executive Director of Fargo’s Red River Women’s Clinic – expressed her view that the soon to be demolished clinic is “a piece of Fargo history”. It most definitely is— and a regrettable one at that.

A Visitor from the Past

A VISITOR FROM THE PAST I had a dream the other night, I didn’t understand. A figure walking through the mist, with flintlock in his hand. His clothes were torn and dirty, as he stood there by my bed. He [read more…]

The Fetal Loss Bill: Was it the Life Bill Nobody Knew About?

When it comes to the issue of life and the unborn, the recently completed 65th Legislative Assembly was silent. Or was it? There was one bill – House Bill 1292 – that may well be the bill that almost nobody [read more…]

Last month we published an article explaining that a bill was in the works to ban dismemberment abortion in North Dakota. That bill later become House Bill 1546 and is sponsored by Rep. Luke Simons (R – District 36). If [read more…]