In politics it’s not uncommon for candidates to ignore opponents who they consider not to be a threat to them. On the other hand, it’s often said that if an opponent – or their surrogates – attack it’s because they feel threatened. When it comes to North Dakota’s Secretary of State’s race within the North Dakota Republican Party, I’d suggest it’s the latter.

Back in December, we wrote about Mandan resident Will Gardner’s decision to challenge long-time Republican incumbent Al Jaeger for the party’s endorsement for Secretary of State. Jaeger has held the office for a quarter century. In fact, Gardner was in high school when Jaeger was first elected to the office.

Despite the fact that Gardner is likable, successful, tech-savvy, and conservative; it hasn’t stopped some people from attacking him in the days leading into the NDGOP State Convention. In fact, I’d suggest that the attacks are because of those things, not in spite of them.

One example of these attacks was on display this last week as Rep. Jim Kasper (R – District 46) wrote a piece for Say Anything Blog. While I often like the things Kasper says and does, this one was unnecessary and even inaccurate. For example, he claims that Gardner’s criticisms “come right out of the progressive Democrat playbook even though he is running as a Republican”. I suppose if pointing out the fact that the North Dakota Secretary of State’s office has been archaic and out of date under Jaeger’s leadership, then it’s guilty as charged. Heck, if you want to start a business, you have to fax the paperwork. What year is this again?

This picture of Al Jaeger speaks volumes as well: 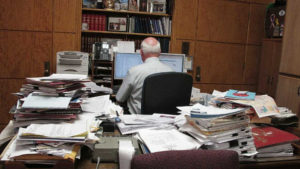 Interestingly enough, the North Dakota Watchdog Network’s Dustin Gawrylow responded to Kasper’s claims with an article of his own. Without even tearing apart Al Jaeger’s record – something Rob Port himself did just four years ago –  he made the case for Will Gardner as Secretary of State and rightfully referred to criticisms of him as “petty and vindictive”.

What we have here is a perfect example of what’s wrong with much of today’s North Dakota Republican Party— an entitlement mentality. To be more specific, it’s the “Shut up and wait your turn!” mentality. Unfortunately, it prevails far too often. You see, some folks think that because Jaeger has served for so long that he’s somehow entitled to the position as an incumbent— until such time that he deems it appropriate to pass on the proverbial torch to the next generation.

The problem with what some call the “Bismarck Swamp” is that they want to be in control of who inherits the torch. To be challenged outright by someone like Gardner is… well… not appreciated. It simply doesn’t fit with their agenda or their tradition.

This is further illustrated by information passed on to me today by someone with access to conversations within the party on the subject. Allegedly some folks would like to see Deputy Secretary of State Jim Silrum take over for Jaeger at some point. But there’s concern with his lack of name recognition. The story goes that if Jaeger can be elected to another term and then later resign, Silrum could take over via appointment and essentially become the incumbent— a major advantage in North Dakota politics.

Is the aforementioned circumstance plausible? Absolutely. Especially when we consider the fact that its been done before. As we pointed out way back in October, that’s how our current Tax Commissioner got his job.

This weekend delegates for the North Dakota Republican Party are going to have a choice. It’s a simple one really. They can choose to have more of the same – embodied in the candidacy of Al Jaeger – or they can send a message to the Bismarck Swamp that it’s time to turn the page to a new chapter in our state’s history. A chapter that includes the technology of the 21st century and a man who understands it and knows how to use it.

It was long known that if Republican State Senator Kelly Armstrong of District 36 was successful in his bid to replace Congressman Kevin Cramer in the U.S. House that he would need to resign his seat as a state lawmaker. [read more…]

Do Primaries Hurt Attendance at Conventions?

In North Dakota’s current political climate, one of the first questions asked of those who announce their intention to run for national or statewide political office is, “Will you abide by the outcome of the convention?” The indication of course [read more…]

Reed Christensen – Young Republicans State Chairman (Photo Courtesy of Dan & Wendi Johnston) “There is nothing wrong with describing Conservatism as protecting the Constitution, protecting all things that limit government. Government is the enemy of liberty. Government should be [read more…]