A few days ago, we reported that 34 of 47 NDGOP District Chairs have signed onto a letter of support for Kelly Armstrong in the race for U.S. House. This information was released on Armstrong’s website as Republicans across the state prepare to head into the NDGOP State Convention next weekend in Grand Forks.

As part of that article, we suggested that one issue Armstrong needs to address is how he would have voted on the recent boondoggle known as the 2,232 page omnibus bill. We expressed our displeasure with this awful piece of legislation, recently passed by the U.S. Congress and signed into law by President Trump.

Thanks to a message from Rep. Luke Simons (R – District 36) today, we now have our answer showing where Kelly Armstrong stands on the issue. In response to the question, “If you were in Congress would you have voted for the Omnibus budget? Why or why not?” Armstrong said:

“We are currently governing by crisis. We need to stop with these omnibuses and continuing resolutions. This bill gave critical funding for our military— that part I support.

“The lack of funding for border protection in this bill was very puzzling, but then inclusion of funding for planned parenthood was even more frustrating. I would not have been able to vote for the most recent omnibus.”

You can see his comments here: 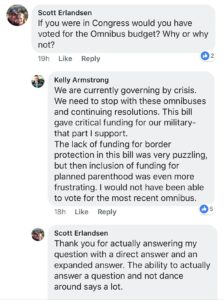 This is encouraging for Republicans, North Dakota, and the nation as a whole. Armstrong is right— we need to stop governing by crisis. Congress needs to do their job and pass an actual budget. As Pew Research recently pointed out, in over four decades since the current appropriations process was implemented, Congress has passed all of its required appropriations on time on just four occasions (1977, 1989, 1995, and 1997).

What’s also encouraging about Armstrong’s comments is the fact that he recognizes how awful it was for so many Republicans to vote for a bill that included funding for Planned Parenthood— the leading proponent of abortion in the nation. It’s difficult for Republicans to defend their position on being Pro-Life if they’re voting for this kind of legislation.

Many of us are sick and tired of Washington. What many Republicans want is the assurance that we’re not just sending more of the same to Capitol Hill. Armstrong’s expression of opposition to the recent omnibus bill is a step in the right direction for his campaign. In addition, his website says this:

“Washington is broken. Kelly Armstrong will get Washington back to work by shrinking government, protecting individual liberty and restoring the strength of the American economy and jobs.”

If he wins the endorsement from a majority of delegates to the NDGOP State Convention, wins the primary in June, and then the general election; it will be expected that he will hold true to his word. We’re looking for change. Anything less from Kelly Armstrong would just prove to be more of the same. And that’s the last thing this state and country needs.

We need someone willing to follow the admonition of John Adams:

“Always stand on principle even if you stand alone.”

Armstrong has a very good chance of being the next U.S. Congressman from North Dakota, but he has a convention to win first. And his stance on the omnibus bill is an important one in making that happen.

The following article was submitted to The Minuteman by John H. Wilson. In January of 2019, the New York State Legislature crossed a line, and legalized abortions regardless of the stage of pregnancy. In essence, the Reproductive Health Act (RHA) allows [read more…]

It was long known that if Republican State Senator Kelly Armstrong of District 36 was successful in his bid to replace Congressman Kevin Cramer in the U.S. House that he would need to resign his seat as a state lawmaker. [read more…]

In early September, we reported that Charles Tuttle – a former NDGOP candidate for U.S. House – had filed his paperwork to run as an Independent for the same office. You may recall that Tuttle had thrown his hat in [read more…]