I’ve made no secret about the fact that I believe the NDGOP can do better in finding a candidate to run against Democratic incumbent Senator Heidi Heitkamp than State Senator Tom Campbell. Last month, I even wrote an article showing that Campbell’s voting record really isn’t very conservative. 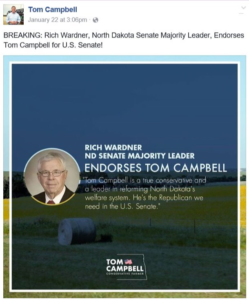 As you can imagine, I find Wardner’s characterization of Campbell as a “true conservative” to be quite misleading. And besides that, it’s almost amusing. Why? Because the Majority Leader himself is even less conservative than Campbell is. Wardner scored a disappointing 44% in the recent American Conservative Union Foundation’s (ACU) “2017 Rankings of North Dakota“. To put that in perspective, that’s just 5% points better than the worst Republican in the Senate– Judy Lee.

Senator Wardner’s claim that Tom Campbell’s “a leader in reforming North Dakota’s welfare system” is also baffling. In what respect has Campbell been such? It’s true that he sponsored Senate Bill 2279 last session, which would have required drug testing of those receiving welfare benefits— more specifically “Temporary Assistance to Needy Families” (TANF). However, that bill failed– admittedly, not for lack of trying on his part, but even Senator Wardner voted against it.

So, what exactly has Campbell done to advocate for true reform of North Dakota’s welfare system in the eyes of Senator Wardner? I went through the bills that he either sponsored or co-sponsored the last three Legislative Sessions – together with his video of comments made on the Senate floor – and I find nothing to prove Senator Campbell’s leadership in this area. And while he is currently serving on the interim’s Health Services Committee, I find nothing in the minutes of those meetings to prove this mysterious leadership either.

Health and Human Services (HHS) is one of the sacred cows of the North Dakota Legislature. For the 2015 – 2017 biennium, HHS makes up 27% of the budget to the tune of $3.89 Billion. Since the 2007 – 2009 biennium, the amount of dollars spent on HHS has increased by 80%! Is that conservative? And where has Tom Campbell been in speaking out against it?

As a member of the U.S. Senate, Campbell would have to take a position on the huge entitlement problem our nation faces. And if he hasn’t had the courage to speak out against North Dakota’s bloated entitlements, is there any reason to believe that he will in Washington? The closest he even comes to addressing the issue on his campaign website is when he mentions the nation’s “mountain of debt” and “wasteful spending”. He needs to be more specific than that.

Is Tom Campbell a better choice than Senator Heidi Heitkamp? Yes. But I’ll say it again… this isn’t a conservative we’re dealing with here, folks. So, let’s not pretend that he is.

Late last year, the national media inundated America with reports of sexual misconduct. Hollywood in particular was replete with such stories. But politics wasn’t immune either. Whether it was 40-year old allegations surrounding Alabama’s U.S. Senate candidate Roy Moore or [read more…]

It’s here. And there’s a buzz in North Dakota and across the nation as people are turning out in record numbers for the 2018 midterm elections. What that buzz means, we don’t quite know yet. It appears that by all [read more…]

Many Republicans Upset with Rick Berg’s Comment on Luke Simons

It’s been 12 days since the North Dakota House did the unthinkable, by disregarding their own rules and ignoring Due Process, as they expelled Rep. Luke Simons (R – District 36) for uninvestigated allegations of harassment. Approving of the pathetic [read more…]