I’ll never forget my fifth grade year when I was declared the class Spelling Champion. I chuckle now, but it was a big deal to me then. It must have set the tone for my life, because from that point on spelling has been important to me. In fact, to this very day, it drives me nuts when I find that I’ve misspelled something. And it’s even worse when others find my mistakes before I do.

In spite of the fact that discovering my own spelling errors bothers me, I’ve somehow found a way to not let the mistakes of others send me into a tizzy. And there’s plenty out there. I’ve found them in scriptural texts, books, magazines, websites, etc. Social media is littered with examples.

Politics is no exception to these kinds of errors. Heck, back in May of this year, two authors published an article documenting “The running list of typos from President Trump’s White House“. They rightfully acknowledged that, “Donald Trump was elected to lead, not to proofread.” But then they couldn’t help themselves when they said, “… no other administration has ever shown such disregard for the English language — and done it so publicly, and so frequently.”

In addition to President Trump’s administration, we have our own examples in North Dakota of those along the campaign trail who’ve been critiqued for failure to spellcheck like they should. The state’s most well-known political blogger pointed out an error by North Dakota Republicans back in 2016, when they spelled House Minority Leader Corey Mock’s name incorrectly on a mailer. You can see it below. 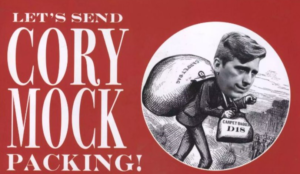 The amusing thing about that article was that the author had a misspelling of his own in it. I’ll let you find it for yourself.

A more recent example of this was posted to Facebook by the political website known as ND xPlains— which is run by former Democratic State Senator Tyler Axness. This time the offender was District 35 Senate candidate Gary Emineth. You can see the post below with a picture of Emineth’s mailer. 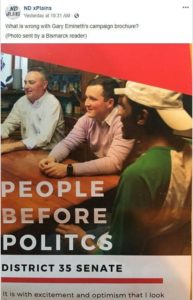 Lest we think that only Republicans make spelling errors, it’s simply not true. Not long ago, I had a campaign mailer from Bismarck City Commissioner – and committed Democrat – Nancy Guy sent to me. It too contains an error. You can see it below as well. 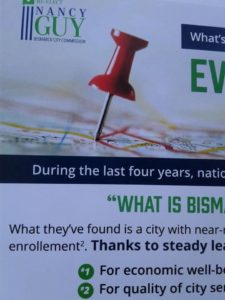 While I disagree with Nancy Guy on many political issues, I chose not to run with the goof-up in the days leading up the June 12th election. To me, these things are what they are— mistakes. We all make them. And yes, some folks make a lot more than others. Can they be avoided? Sure. But I’m actually put off more by how some people make a big deal out of misspellings than the fact that someone made them in the first place. After all, what’s the indication? Let’s be honest, people make a big deal out of them because they want to make someone look bad.

For example, if you’re old enough, you might just remember Vice President Dan Quayle’s gaffe 26 years ago this month. Quayle had been a lawyer, served in the U.S. House and U.S. Senate, and was VP to President George H.W. Bush. While assisting with an elementary school spelling bee in Trenton, New Jersey, he gave the word “potato”. The student spelled it correctly on the chalkboard, but Quayle said it should have an “e” on the end. He never lived it down— as you can see in this video here. To be somewhat fair to the Vice President, the cards he was given by the school had it spelled wrong. Yet, it made no difference. The damage was done and his political foes made him out to be an idiot.

I’ve actually read social media comments where people question the intelligence of others, because they are prone to misspellings. One writer put it this way:

“We have a long history of linking spelling skills to intelligence. We think people who can’t spell are ignorant, illiterate, or stupid, despite having research dating back to the 1970s that shows that there is no significant association between spelling ability and intelligence.

“It is widely reported that Albert Einstein was initially considered to be intellectually impaired because he couldn’t spell. Lucky he didn’t lower his expectations…”

I simply don’t believe that it’s entirely rational to gauge the intellect of another person by their ability to spell. Nor do I believe it’s rational to gauge the legitimacy of a candidate on a goofed up mailer. In fact, two of the most brilliant political minds I know also happen to be very poor at spelling. Yet, I don’t think any less of them for it.

I totally get it though. It’s politics. In the battles known as campaigns, some people look for anything and everything to critique about those candidates they don’t want to see prevail. But seriously, aren’t there better things to focus on than whether a mailer has a word with an extra letter or didn’t have a letter where it should’ve been? What about… oh, I don’t know… actual policy issues? You know, those things that have the potential to affect our everyday lives.

Let’s have the good sense to choose our candidates based on things of consequence, not the inconsequential.

For Bismarck Mayor Mike Seminary, it’s one thing to try to show strength in the face of adversity. It’s quite another to show blatant disregard for those who may well boot him from the office he currently holds. Last week [read more…]

Back in September, President Donald Trump signed an Executive Order that stated: “… it is the policy of the United States to cooperate and consult with State and local governments, to take into account the preferences of State governments, and [read more…]